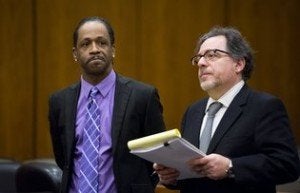 By Anne Gonzales
[email protected]
After a year of more drama than comedy, entertainer Katt Williams stood in a Sacramento courtroom Wednesday pledging to get serious about showing up for future court dates.

The celebrity comedian, rapper and actor appeared before a judge for a bizarre Capitol Park incident in November, when the California Highway Patrol reported he drove a three-wheeled motorcycle on sidewalks, led officers on a short pursuit and blew through several red lights. The “Friday After Next” movie star added to his legal woes when he failed to appear at least three times since then.

Read the full story at the Sacramento Bee

Harris Taback is a criminal defense attorney with over three decades of experience in the courtroom. When he takes on a case, he brings with him a strong sense of passion and diligence to obtain the best outcomes for his clients. Harris operates on the principles of empathy and reason when negoti...